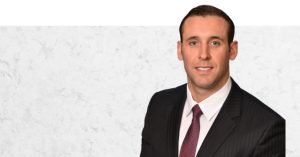 Mark B. DeSanto has extensive litigation experience in federal courts throughout the United States representing consumers, pension participants, investors, and employees in class actions involving false and misleading advertising, defective products, data breaches, ERISA litigation, securities litigation, employee rights, and other consumer protection litigation. Since 2018, Mr. DeSanto has been selected by Pennsylvania Super Lawyers as a Rising Star (an honor reserved for 2.5% of lawyers in Pennsylvania), as selected by his peers based on his professional achievements. Mr. DeSanto authored a chapter of a course handbook published by the Practising Law Institute on March 1, 2018, for the 23rd Annual Consumer Financial Services Institute titled Chapter 57: The Impact of Payment Card II on Class Action Litigation & Settlements (ISBN Number: 9781402431005).

Mr. DeSanto has handled all aspects of class action litigation, from inception through pretrial motion practice, and contributed significantly to the following class actions that have recovered more than $300 million for class members (among others):

Mr. DeSanto received his Juris Doctor (J.D.), cum laude, from the University of Miami School of Law in 2013, where he was also a member of the National Security and Armed Conflict Law Review. During his second and third years of law school, Mr. DeSanto worked full-time at a securities litigation firm while also attending law school full-time and earning Dean’s List and President’s Honor Roll distinction (4.0 GPA) as well as honors distinction in Trial & Litigation Skills courses I and II. Prior to attending law school, Mr. DeSanto attended the University of Miami where he earned his Bachelor of Business Administration (B.B.A.) in Finance in 2009. Mr. DeSanto is admitted to practice law in Florida, Pennsylvania, and New Jersey.

Outside of the office, Mr. DeSanto enjoys spending time with his wife and son, playing golf, and going to the gym early every morning.

Tell Us About Your Claim

Sauder Schelkopf Attorneys at Law
We use cookies on our website to give you the most relevant experience by remembering your preferences and repeat visits. By clicking “Accept”, you consent to the use of ALL the cookies.
Do not sell my personal information.
Cookie SettingsAccept
Manage consent

This website uses cookies to improve your experience while you navigate through the website. Out of these, the cookies that are categorized as necessary are stored on your browser as they are essential for the working of basic functionalities of the website. We also use third-party cookies that help us analyze and understand how you use this website. These cookies will be stored in your browser only with your consent. You also have the option to opt-out of these cookies. But opting out of some of these cookies may affect your browsing experience.
Necessary Always Enabled
Necessary cookies are absolutely essential for the website to function properly. These cookies ensure basic functionalities and security features of the website, anonymously.
Functional
Functional cookies help to perform certain functionalities like sharing the content of the website on social media platforms, collect feedbacks, and other third-party features.
Performance
Performance cookies are used to understand and analyze the key performance indexes of the website which helps in delivering a better user experience for the visitors.
Analytics
Analytical cookies are used to understand how visitors interact with the website. These cookies help provide information on metrics the number of visitors, bounce rate, traffic source, etc.
Advertisement
Advertisement cookies are used to provide visitors with relevant ads and marketing campaigns. These cookies track visitors across websites and collect information to provide customized ads.
Others
Other uncategorized cookies are those that are being analyzed and have not been classified into a category as yet.
SAVE & ACCEPT
Share This